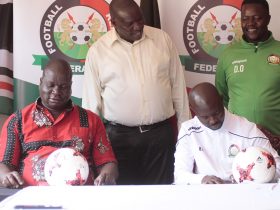 Samuel Osoo scored a brace in the 28th and 43rd minutes with Richdonald Bolo netting the third in the 77th minute. Rajab Umar’s goal in the 46th minute to half the deficit only turned out to be a mere consolation.

The FKF Center of Excellence’s Assistant coach Edwin Nandwa exuded confidence in his team as they prepare for the upcoming MIC cup tournament in Spain.

“The players have shown great determination and skill during today’s match. I believe the purpose of this friendly match has been achieved and will enable us to start on the right footing ahead of the tournament,” said Nandwa

The U16 Boys team resides on a homeschooling program at the Federation’s Center of Excellence in Thome, Nairobi, with daily training sessions at the Wadi Degla Club in Runda.

The team participated in the tournament last year where they bowed out in the quarterfinals of the competition’s consolation stage at the hands of French side ASM Belfotaine. They went on to win the shield category of the tournament.

The team leaves for Valencia, Spain on April 1, 2020, where they will have three training sessions and a friendly match before they head to Costa Brava for the MIC cup tournament.